Does My Roof Need to Face South for a Solar Power System Installation?

In a previous blog post I offered some advice on what makes a house suitable for solar.  One of the factors was the orientation of the roof to south, which I’ll delve deeper into here.

The maximum energy production comes when the sun’s rays are perpendicular to a solar panel (solar module). This is sometimes accomplished by mounting a panel on a “tracker”. The tracker rotates the panel to continuously face the sun as it moves across the sky from sunrise in the east to sunset in west. Trackers are impractical for houses and rooftops in general but the concept is useful to demonstrate what the maximum production would be.

Now, the practical best case scenario is having the panel permanently fixed to face south.  This is because in Canada the sun is always south of us at 12pm, when its intensity is highest.

So, beyond the obvious reasons, why don’t we pick up houses and other buildings with cranes to have them face south?  The simple answer is that having panels facing directly south isn’t required for good production.  That’s good, because houses aren’t built that way – see the photo of a neighourhood in Mississauga, Ontario. I see one or maybe two houses that look like they might face directly south. 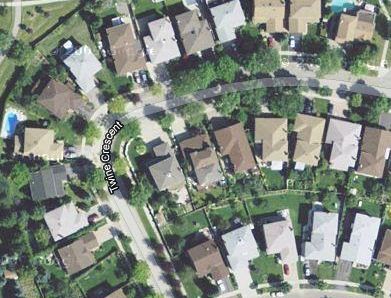 So how much of an effect does being off-south have?   To determine this, we use the concept of azimuth, which is simply the angle that the panels face, relative to south, when looking from above. 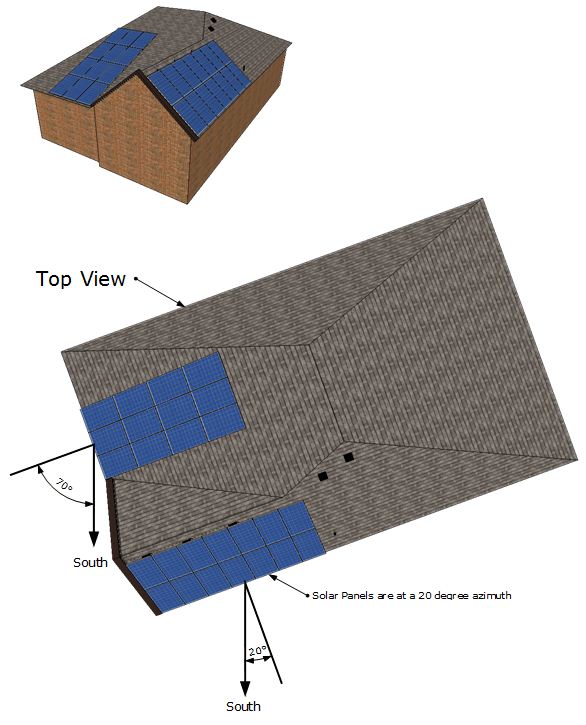 As you can see, this house has two solar panel arrays, with different azimuths.  Let’s find out how much the azimuth affects production.  We’ll assume a common 4/12 roof pitch (18 degrees) in Mississauga.  For the array with a 20 degree azimuth, the production is 0.6% less than if the array pointed directly south.  Having your house 20 degrees off south is insignificant!  For the array with the 70 degree azimuth, the production is 7.7% less than if it pointed south.  Not bad considering that it’s almost facing west.  I should note here that as the roof pitch of the house increases (for example, to a 12/12 or 45 degree roof pitch), the production is affected more by a change in azimuth.

The silver lining of having a building that doesn’t face south is that you can get away with putting arrays on two of the pitches of the house (the SW and SE facing pitches as in the example above).  The production per solar panel is less, but you are able to increase the number of panels on the building.

So what’s the lesson here?  Facing south is ideal, but is by no means a deal-breaker. Check out your house on google maps to see how it fares!