Canada versus the World!

Canada may not be your top choice for a tropical destination, but luckily for us warm weather actually has very little to do with our ability to generate solar power! Surprising to many, latitude has only a small effect on solar production. For example, a solar PV system located in Calgary will produce approximately the same amount of energy on an annual basis as that same system in Miami, Florida.  A PV system in Edmonton produces about the same as a system in Rio de Janeiro, Brazil.  Canada receives lots of sun all year round and solar PV modules actually produce more energy when they are cold! 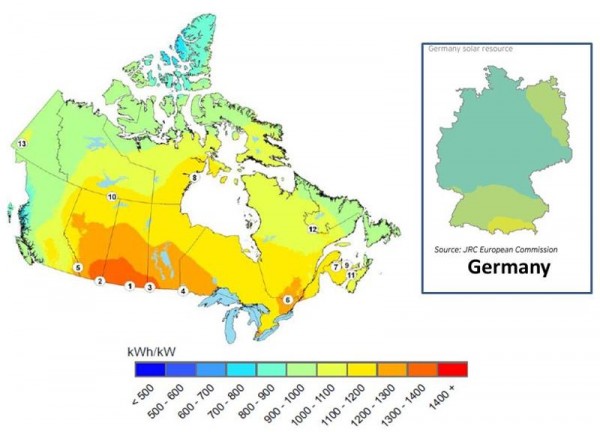 Even remote areas of the Northwest Territories, Nunavut and the Yukon rate high in yearly PV potential. A solar PV system designed and installed by SkyFire in Fort Simpson, NT has produced ~980 kWh/kW in the year since its installation – that’s more than the PV potential of cities such as Tokyo, Paris and London!

These examples illustrate the importance of investment in Canada’s solar energy resource in the years to come.

← Heading back to Peru with Light Up the World! Making Sense of Going Solar: The Residential Solar Install Process →