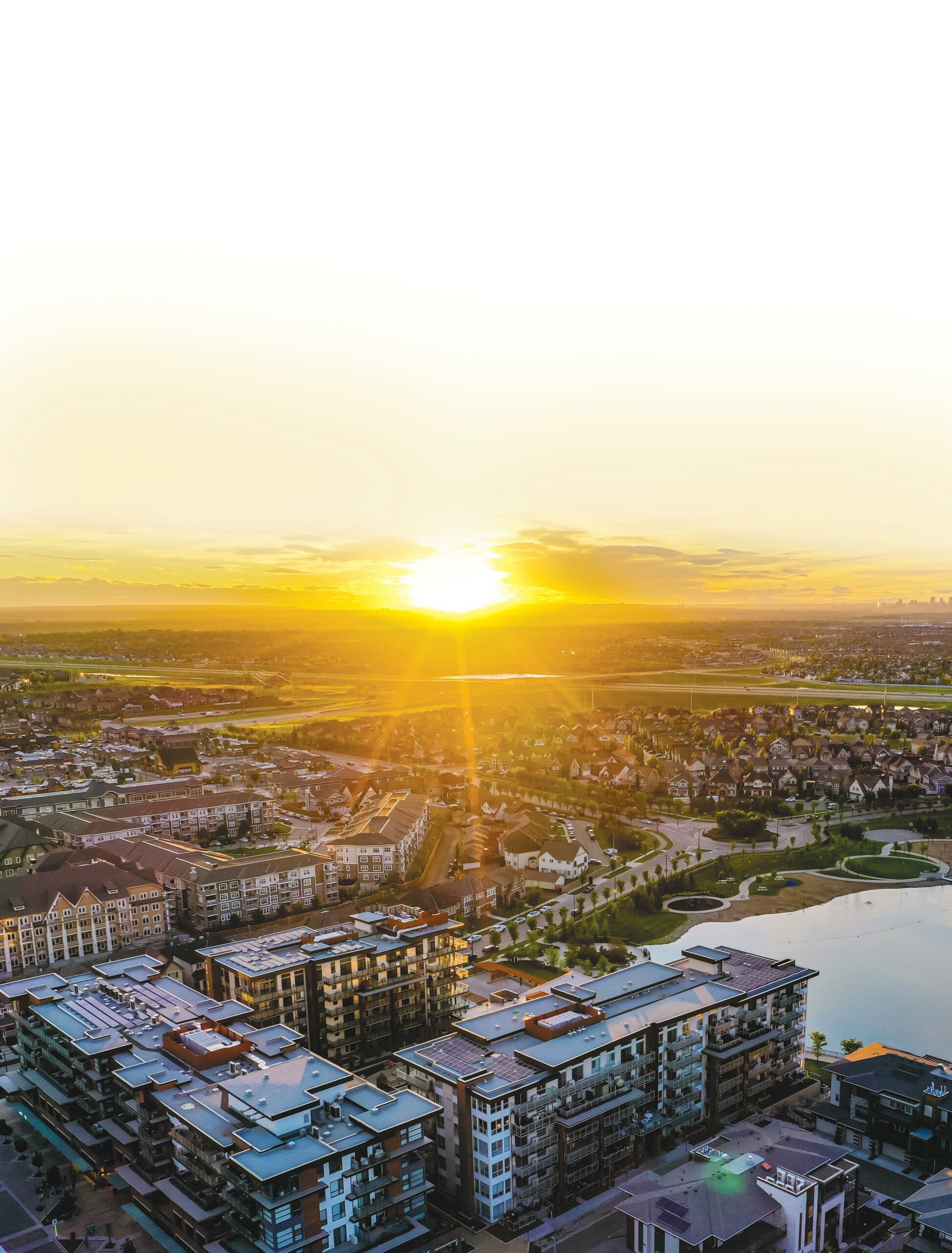 Solar energy investment into Westman Village predates Jayman BUILT’s industry-leading commitment to solar arrays on every new single-family home and was intended to offset as much energy as could be accommodated by available roof space on the property. All in all, eighteen separate projects have been completed over the years of the Village’s growth, and SkyFire Energy has provided every project to completion.

“It was kind of hard to fathom the scale of it at first,” SkyFire’s CEO David Kelly explains to Village Life. “When we were looking at plans for the development it was hard to picture how big it is. This was a larger project with more complex engineering than usual due to multiple types of buildings and installations. We were dealing with multiple parties, from Jayman to Centron to electrical contractors and roofing contractors. The systems changed on every building.”

“There was limited roof space, as there always is on multi-story projects, but we were able to put close to 100 modules on just about every building. I think we’re 369 kW total on the property.” The solar energy designed and installed by SkyFire was intended to offset what is called the house loads on the multi-family buildings, in other words, hallway lighting, elevators, any loads, and appliances that serve common areas outside of private residences.

Jayman BUILT’s connection to SkyFire echoes both businesses’ excellence in their respective fields. It also speaks to common priorities, since one of Jayman’s more notable contributions to the local development business community in the last couple of decades has been the conception and creating of Built Green standards, now a widely adopted system of environmental assessment and improvement for the development and construction industries in Alberta and beyond. As a company that’s spent many years at the forefront of addressing sustainability issues for an industry with a significant carbon footprint, Jayman BUILT was always going to be the first large builder to adopt solar technology at scale.

By delivering on their commitment to sustainable building practices, Jayman BUILT has delivered a superior living situation marked by unprecedented comfort and service, with less long term carbon output and less contribution to future climate instability. Doing things differently comes down to practical considerations like electricity usage as much as it does to providing connective, positive day to day services.

“It seemed way the heck out there when it first started getting built, but now there’s so much that’s blossomed around it, it doesn’t feel like it’s way out in the middle of nowhere anymore,” David says of Westman Village. “I give Jayman kudos for stepping up and doing solar on all the buildings. It was not something they had to do, but I think it says something about Jayman’s philosophy in building more sustainably. They were great to work with on the whole process. They took our ideas and we made changes here and there to accommodate changes in their designs since commercial rooftops are never built exactly the way they’re designed.”

As Western Canada’s most established solar contractor, SkyFire themselves in fact learned and developed new processes as a result of Westman Village’s commitment to the low carbon cause. After doing so many different buildings with so many different factors to balance and manage from a construction standpoint, SkyFire eventually executed an exceptionally smooth building process for the eighteenth and final solar array on the Lyric building.

Rather than trusting as-built contractor diagrams or measuring every part of the relatively large and complex rooftop by hand, SkyFire flew a drone above the job site to take high-resolution digital images, which were used to create inch-perfect as-built drawings to build and design with. Such advancement may not have occurred for some time for SkyFire if Jayman BUILT hadn’t put their environmental money where their mouth was and invested in future-focused solar technology.

With the entirety of Westman Village kitted out for as much solar as it can handle, SkyFire Energy will continue proliferating one of the world’s most established and advanced renewable energy technologies from single-family homes to utility-scale projects, and on to expand the residential home market into the next level of energy sustainability as part of net-zero home design. The future is bright for companies that embrace the future of energy delivery, and more work is always on the horizon for two companies faced steadily forward in the fight against climate change and for a more balanced future.