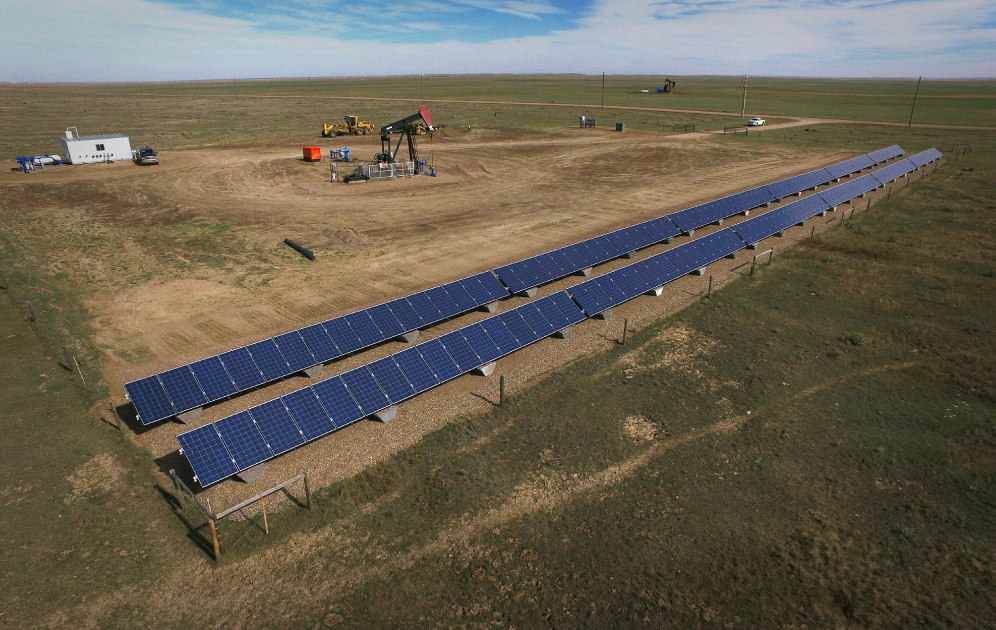 While it does sound quite ironic that a solar PV system is powering oil wells and equipment, successful collaboration between fossil fuels and renewable energy can be achieved when two leading energy innovators work together.

Imaginea Energy Corp. is an energy company based in Calgary, Canada that produces Oil and Gas. Over 2000 boe/d…for now. But what’s really interesting is the way they go about it. They’re defying industry stereotypes by focusing on sustainability and community responsibility in everything they do. Not because they have to but because it’s the right thing to do and it’s the smart thing to do. They’re the oil company of the 21st century. They believe the energy industry can be a force for good. And they’re going to get there through collaboration, ingenuity and innovation.

We were approached by Imaginea to design and install a solar PV system as a renewable and clean power solution for their pump jacks. This 50 kW grid tied solar PV system generates over 60 MWh of clean green power in a year, which is equivalent to powering over 9 Alberta residences, and offsetting 38 tonnes of carbon dioxide emissions per year. The system also incorporates an innovative “made in Alberta” mounting system, which allows for deployment and redeployment in even the most remote locations.

“It is very exciting to establish this synergy of energy technologies, which demonstrates the viability of sustainably developing our resources here in Alberta. We have discovered that sites such as this, which have historically been overlooked in regards to alternative or renewable energy, are in fact perfectly suited for it. This system will continue to produce clean renewable energy for decades to come, adding a new and profitable asset to Imaginea’s operations,” said Brodie Yyelland, Project Manager at SkyFire Energy.

“This is a small, yet important step on our road to producing pollution and emission free Oil & Gas in Alberta. It is a demonstration of our commitment to clean air, water, land and respect for the communities we operate in. We hope that with this first step we will push ahead to not only produce clean hydrocarbons but to inspire environmentally friendly use of our product, allow for infinite recycling and benefit future generations to come.” said Krzysztof (Kris) Palka, Chief Strategist for Imaginea Energy Corp.

Both Imaginea Energy and SkyFire Energy are excited to continue improving and challenging the energy landscape in Alberta, by prioritizing the “three Ps” equally: Planet and People and Profit.